Shopping for a sedan in Charleston, Mount Pleasant, or Summerville? Learn more about the 2016 Nissan Sentra in this review that our team at Charleston Nissan put together. 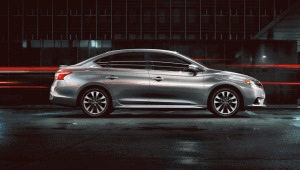 Hop inside a Nissan Sentra and you’ll find a spacious cabin with available leather upholstery, soft-touch materials, and a leather-wrapped steering wheel. The Nissan Sentra combines refinement with utility, offering features like 60/40 split rear seats that provide extra cargo space when you need it.

The 2016 Nissan Sentra also provides 111 cubic feet of passenger volume, which is more than both the 2016 Toyota Corolla and Hyundai Elantra. They only offer 110.5 and 110.4 cubic feet, respectively.

Spacious and crafted with premium materials, the 2016 Nissan Sentra delivers comfort and convenience around every turn.

Capable of up to 130 horsepower, the 2016 Nissan Sentra comes paired to a six-speed manual or two-speed continuously variable transmission engineered to maximize efficiency with every mile. In fact, the Sentra gets up to an EPA-estimated 27 mpg city/36 mpg highway rating, which means you can go further between fill-ups. 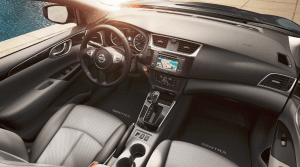 Leading-edge technology features, like standard Bluetooth®, help to keep you entertained and in touch throughout your journey in a 2016 Nissan Sentra.

With technology such as NissanConnectSM and Siri Eyes Free, the 2016 Nissan Sentra allows you to integrate your mobile device’s favorite features directly to its dashboard. Streaming music, looking up directions or traffic information, or listening to music has never been easier with the Sentra’s available features, and you can keep your smartphone tucked away in your pocket where it belongs.

The Sentra also offers a hands-free text messaging system, which reads your text messages through the sound system, eliminating the desire to look at your phone while driving. It also comes with voice recognition, allowing you to reply to any text you receive while driving.

The 2016 Nissan Sentra offers a smooth performance, incredible technology, and a spacious interior. With its well-rounded package, the Sentra offers reliable transportation for commuting, road trips, and running errands, and Charleston Nissan has a full inventory at our showroom.

If you’re shopping for a 2016 Nissan Sentra near Charleston, Mount Pleasant, or Summerville, schedule a test drive today.

opens in a new window

Thank you for your message!